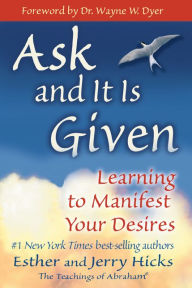 Ask and It is Given

Learning to Manifest Your Desires

Sometimes we get everything we SAY we want yet we are still unhappy! This book helps you refocus your attention to create the life you desire filled with joy and happiness.

“This book will help you understand that you never, ever get it done. It will help you understand your relationship with your history and with your future- but, most important, it will awaken within you your awareness of the potency of your powerful now. You will lean how you are the creator of your own experience and why all of your power is in your now. And ultimately this book will lead you to an understanding of your emotional guidance system and to an understanding of your vibrational set-point.”

~ Esther & Jerry Hicks from Ask and It Is Given

Abraham-Hicks teachings were the original inspiration for the “The Secret,” and they are also the 21st century inspiration for thousands of books, films, essays and lectures that are creating a global paradigm shift in consciousness.

Esther Hicks has co-authored eight books with her husband, Jerry Hicks. Together, they have presented Law of Attraction and Vortex of Attraction workshops for Abraham-Hicks Publications in up to 60 cities per year since 1987.

Hay House, Inc. published the Hicks’ best-selling book, “Ask and It is Given,” in 2004. Since then, they have also published five more New York Times bestsellers:

Esther was born in Coalville, Utah. She married her current husband, Jerry, in 1980 and has one daughter by her former marriage. Currently, Esther travels the world with Jerry, speaking and teaching and writing about the Law of Attraction and the Vortex of Creation.